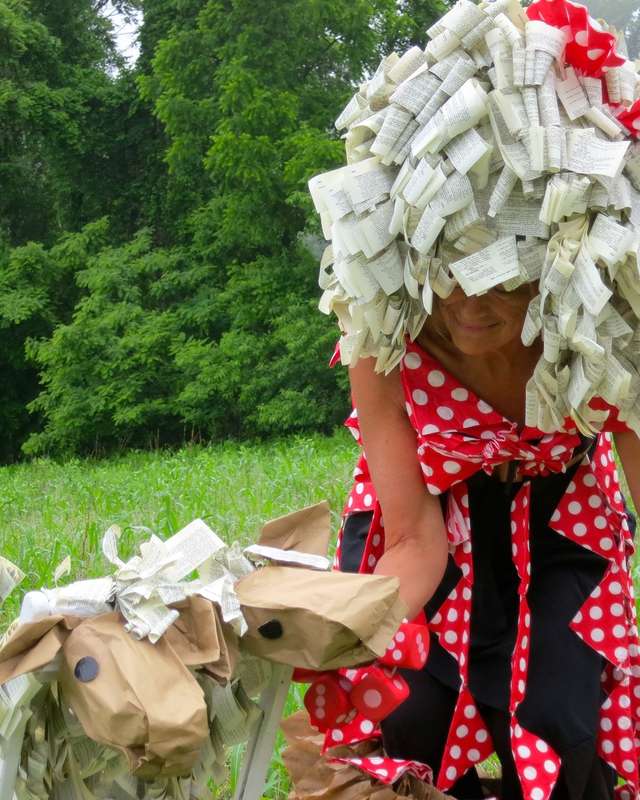 Pat Oleszko makes a spectacle of herself--and doesn't mind if you laugh. Following absurdity to its unnatural ends, her work includes elaborate costumes, props and inflatables all incorporated into solo performantz, film, installations with lithe accompaniment, spatial events with the cast-off thousands, intervent-shuns, and street/walking--ever in heavy dis-guise. From the personal to the political, the work is an exorcise thru humor. Call it satire, subtle-tease or insubordination, it's jest pedaling her-selves, on and off the stage,pumping irony, and disparately trying to bring home the beacon.

In a Nut's Shell

A multi-disciplined Artist of Some Repute, Oleszko has worked from the popular art forms of the street, party, parade, stage, film and burlesque house, to the Museum of Modern Art and Lincoln Center, from Sesame Street Magazine to Ms, Playboy and Artforum. Literally a much decorated artist, she has been rewarded for her perverse efforts including 4 NEA grants, 4 NYFA's, the Rome Prize, a Guggenheim, the DAAD (Berlin) and a Bessie for Sustained Achievement.

The Ms Tricks of Dis Guise

Oleszko has been creating a ruckus for years and by playing the fool, many have happily paid this Fool with splendid results. From lectures to performantzes on the stage or site specific, workshops of one hour, one day, one week and longer, these unique and unpredictable events have played at colleges, museums, businesses, communities, parades and so on and sew, forth. To answer the call for spectacles magnified by rampant visuals, uttered shenanigans and a genial absurd presence, hire the HandyPat..